This is the American Republic F-84 Thunderjet and F-84 Thunderstreak.  These F-84s are at the Virginia Air & Space Center (blue nose), Warner Robins (yellow nose and black nose) and the last one is at Le Bourget (red markings).  Related pages: photos of MiG-15, MiG-17 and MiG-21. Thank you to Mark Morgan and David P. Murphy for helping me identify this type.  Read more about this aircraft after the photos. 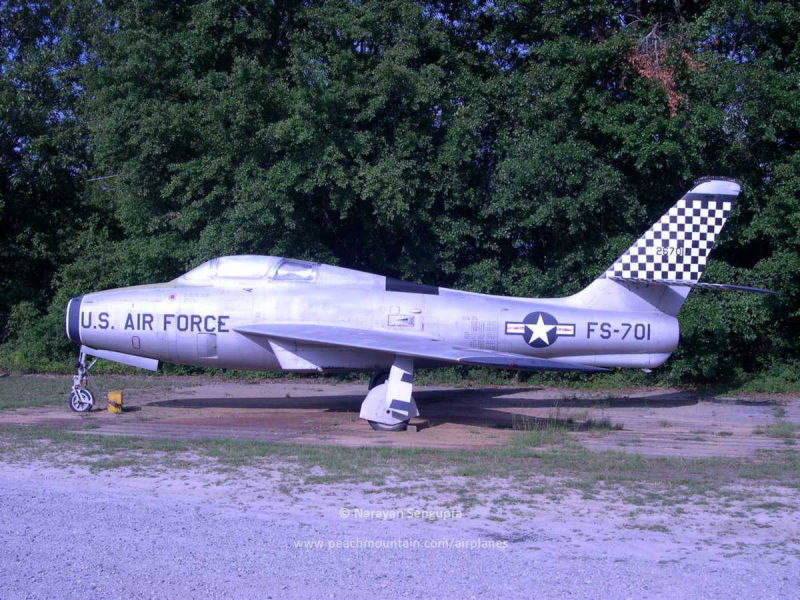 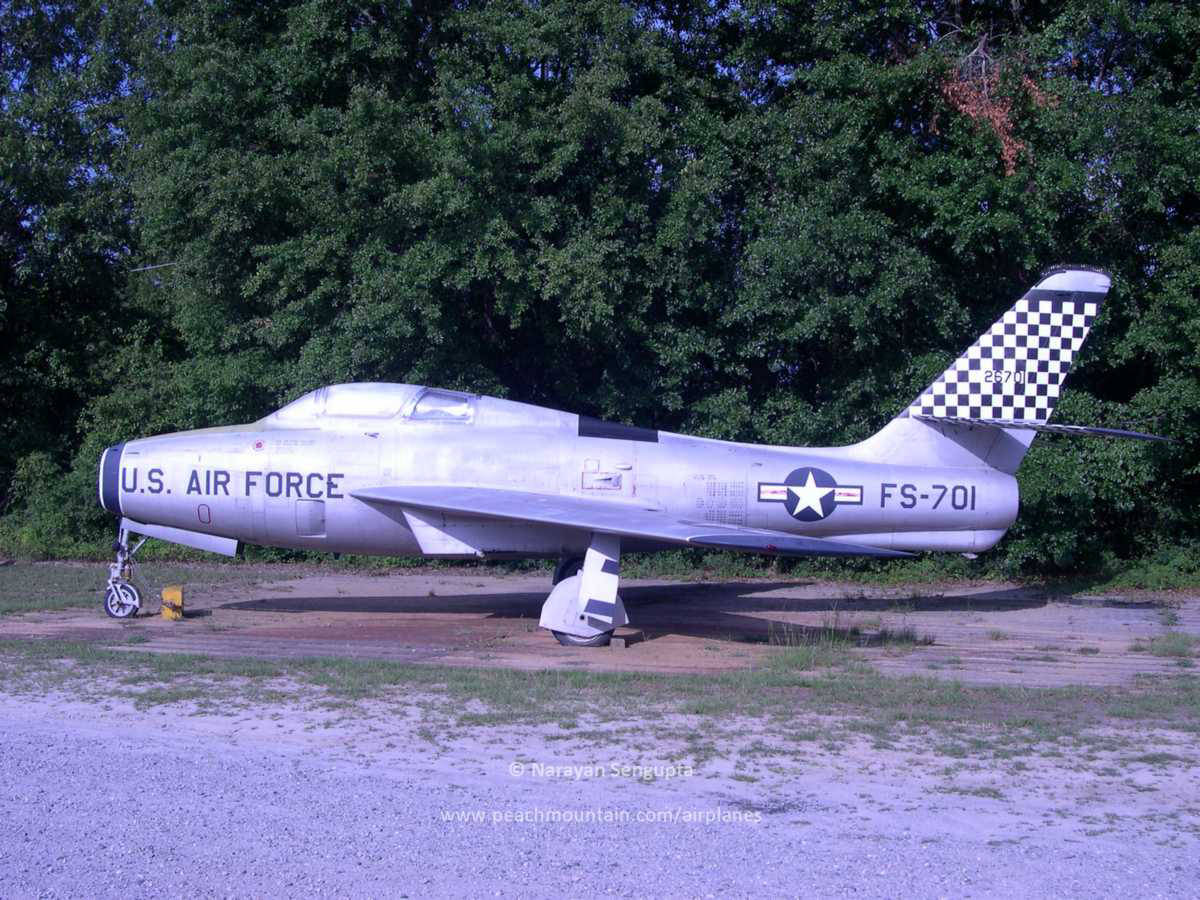 The F-84 was designed by Alexander Kartveli, a Georgian who had previously designed the Republic P-47 Thunderbolt fighter. That frame was unsuitable for a jet, so starting in 1944, Kartveli designed a new one. The new fighter entered service in 1947, but was so plagued with mechanical and structural problems that the Pentagon nearly cancelled the program. A new F-84D version fixed issues, and the aircraft went on to become a big success. Early models had straight wings, but starting with the F-84F, now renamed Thunderstreak, they had swept wings. It was the first American fighter that could do air to air refueling and with the F-84G, the first to carry nuclear weapons. F-84s fought mostly in the Korean War (1950 - 1953), where they were outclassed by faster MiG-15s. Eventually F-86 Sabres were tasked to handle the MiGs while the F-84s performed ground-attack missions. Like the P-47 and earlier Spad XIII, the F-84's tough frame allowed it to handle more damage than many of its peers. At least 7,500 were built. It was used by many NATO and non-NATO American allies.

Kartveli was born Aleksandre Kartvelishvili Sept. 9, 1896 in Tblisi, Georgia, Russian Empire. He immigrated to France, studied aviation there, was a test pilot, worked for Bleriot, etc. One of his Bleriots (not sure which) set a world speed record. He later moved to the US. His designs included the Seversky P-35. The company name later changed to Republic. Remaining there, he also designed the P-47, F-84, F-105 Thunderchief and others. He died in 1974 in New York City under unknown circumstances. Because of his immigrant background and having been born in Russia, he was kept largely hidden from the public and thus remains almost unknown, especially compared to people like Lockheed’s Kelly Johnson.

Adds David P. Murphy: When the F-84 Thunderjet, the straight-wing model, began production, there were difficulties in bringing all the F-84 jets up to the same standard to satisfy Air Force inspectors. Additionally, there were situations where aircraft were shipped overseas as deck cargo, but the F-84 jets had suffered corrosion brought on by salt spray. This accelerated efforts to move aircraft in formations but fighters needed in-flight refueling which was limited to probe and drogue systems.