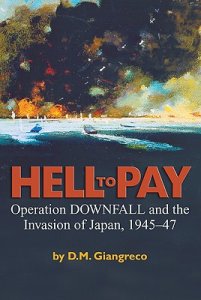 I recommend a new book that recently came out, D.M. Giangreco, Hell to Pay: Operation DOWNFALL and the Invasion of Japan, 1945-1947, Naval Institute Press, 2009.

The book is somewhat rambling and repetitive, and not well organized. However, it presents well-supported arguments showing that the high estimates of U.S. casualties that would result from the invasion of Japan were not post-war rationalizations in the decision to use atomic weapons, but if anything, under-estimates. Pentagon planners forecast between 1.7 and 4 million U.S. casualties, including 400,000 to 800,000 deaths. Avoidance of Japanese casualties was not a war aim, but these also would have been far greater if the U.S. had invaded Japan. (Other Allied forces would have been involved, but the great majority would have been American.)

The book shows that the Japanese had ample reserves of manpower and war materiel, and intended to carry out wide-ranging air, sea, and ground suicide attacks. The Japanese had thousands of planes, and thousands of small boats equipped for suicide operations. The book is particularly interesting in showing that otherwise obsolete Japanese wood and fabric aircraft were well-suited for kamikaze attacks (and actually succeeded in destroying several Navy ships), as radar had difficulty in spotting them. Also, Japanese kamikaze tactics were becoming more sophisticated, and massed attacks, night attacks, attacks using a variety of slow and fast aircraft, and multi-angled attacks, would have made interdiction more difficult.

Giangreco also documents how Japanese geographic conditions would have made Allied ground operations difficult, due to such things as:

1. Mountainous and hilly terrain, well-suited for defensive operations (e.g., for concealment and placement of artillery and troops, storage of war material, etc.). The defensive advantages of such terrain, and the difficulty of destroying tunneled emplacements by naval gunfire or air power, were amply demonstrated at Iwo Jima and Okinawa. This terrain would also have channeled U.S. forces onto narrow roads, not only slowing movement in itself but increasing vulnerability, as shown in such disasters as the Arnhem operation.
2. Large expanses of muddy paddy field, unsuitable for armored vehicles (particularly disadvantageous for U.S. forces, dependent on such vehicles for superiority).

U.S. casualties probably would have been even greater than those estimated by U.S. planners. As the U.S. discovered after the war, the Japanese were able to deduce the locations where U.S. forces would have come ashore, and would have had time to prepare their defenses accordingly. Also, Japan had much greater numbers of planes and other war material than was suspected by the Allies, which were being husbanded to meet the expected invasion. For example, the U.S. underestimated the number of planes held by the Japanese, because the Japanese did not respond to naval bombardments of the Japanese mainland intended to lure out and destroy Japanese planes, and held back full-scale attempts to interdict U.S. bombing and strafing raids. Also, while use of aviation fuel was drastically cut back, even for training, large stockpiles were amassed to repel the invasion.

The U.S. probably would have switched from strategic to tactical use of atomic weapons to destroy troop and weapons concentrations. This would have produced unanticipated casualties from radiation poisoning, probably resulting in much greater long-term (versus immediate) military and civilian deaths from this cause than those resulting from Hiroshima and Nagasaki.

The book also repeats evidence of what should be a well-known fact, the determination of Japan’s high and mid-level military leadership (especially the Army) to fight to the end, no matter what the cost to the military and civilian population. A portion of the civilian leadership shared this attitude. The calculation, which had some basis in reality, was that the massive U.S. casualties that would have resulted from an invasion of Japan would have caused such a public outcry that the U.S. would have pursued a negotiated settlement, rather than unconditional surrender. Victory for Japan was redefined as achieving a military stalemate that left, at a minimum, the core empire intact (the Home Islands, Manchuria, Korea, and Formosa), and guaranteed the continuance of the imperial structure.

From the beginning of the war, the Japanese stressed the superiority of the Japanese martial spirit over the material might of the Allied powers. This emphasis became stronger as American victories multiplied. The Japanese paid great attention to signs of American war-weariness, as reported in U.S. newspapers, such as labor strife and demands for demobilization after the defeat of Germany.

Japanese war planners were prepared to see an additional 20 million Japanese war dead to achieve this goal. (An interesting point noted by the book is that the U.S. contemplated the tactical use of poison gas at invasion sites, against which the civilian population would have been basically defenseless. However, it was far from certain that such use would have occurred.)

On June 13, 1945, War Minister Anami stated "[Diplomacy will have a better chance] after the United States has sustained heavy losses. We cannot pretend to claim that victory is certain, but it is far too early to say that the war is lost. That we will inflict severe losses on the enemy when he invades Japan is certain, and it is by no means impossible that we may be able to reverse the situation in our favor, pulling victory out of defeat." Prime Minister Suzuki stated at an August 3, 1945 cabinet meeting that "Precisely at a time like this, if we hold firm, then they will yield to us." However, the use of atomic weapons made it clear that the U.S. could avoid the costs of invasion. After news of the Nagasaki blast was announced during a meeting of the Supreme War Council, Suzuki stated "The United States, instead of staging the invasion, will keep on dropping atomic bombs."

The book is weak in examining alternatives to invasion that did not require the use of atomic bombs, most prominently, a naval blockade coupled with air operations. According to Giangreco, the U.S. was committed to terminate the war within a year of German capitulation based on decisions reached at Allied conferences at Casablanca, Quebec, and Cairo, and it was unclear how long it would take naval and air actions alone to bring about a Japanese surrender.